It was the major expansion of the Arab peoples in the 7th century AD that led to a breaking of the secret. When they invaded Persia in 642 AD they found sugar cane being grown and learnt how sugar was made. As their expansion continued they established sugar production in other lands that they conquered including North Africa and Spain.

Sugar was only discovered by western Europeans as a result of the Crusades in the 11th Century AD. Crusaders returning home talked of this “new spice” and how pleasant it was. The first sugar was recorded in England in 1099.

The subsequent centuries saw a major expansion of western European trade with the East, including the importation of sugar. It is recorded, for instance, that sugar was available in London at “two shillings a pound” in 1319 AD.

This equates to about US$100 per kilo at today’s prices so it was very much a luxury.

In the 15th century AD, European sugar was refined in Venice, confirmation that even then when quantities were small, it was difficult to transport sugar as a food grade product. In the same century, Christopher Columbus sailed to the Americas, the “New World”. It is recorded that in 1493 he took sugar cane plants to grow in the Caribbean. The climate there was so advantageous for the growth of the cane that an industry was quickly established.

By 1750 there were 120 sugar refineries operating in Britain. Their combined output was only 30,000 tons per annum. At this stage sugar was still a luxury and vast profits were made to the extent that sugar was called “white gold”. Governments recognised the vast profits to be made from sugar and taxed it highly. In Britain for instance, sugar tax in 1781 totaled £326,000, a figure that had grown by 1815 to £3,000,000. This situation was to stay until 1874 when the British government, under Prime Minister Gladstone, abolished the tax and brought sugar prices within the means of the ordinary citizen.

The measurement of the purity of refined sugar, known as ICUMSA numbers; lower numbers indicate a higher level of purity in the refined sugar.

An ICUMSA rating is an international unit for expressing the purity of the sugar in solution, and is directly related to the color of the sugar. There are different types of ICUMSA units, due to the fact that color results from the specific manufacturing processes to which sugar is subjected; the more processing sugar cane is subjected to, the more color is removed, and the final pigmentation of the product reflects the degree of processing to which it has been subjected. 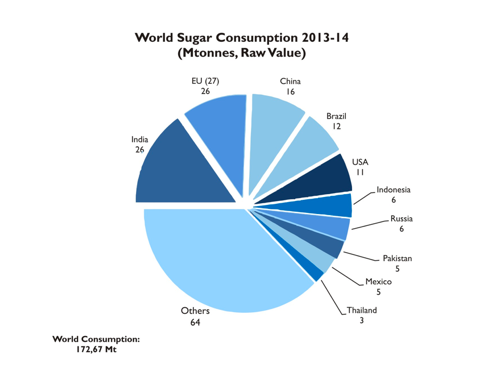 Sugar is produced in 120 countries. Global production now at around 180 million tonnes a year.

Approximately 80% is produced from sugar cane, which is largely grown in tropical countries.

Its share is increasing although the country’s output has witnessed some setback since the 2008-2009 crisis.

Today, a world population of just above 7 billion people, of which 75% (5,5 billion) are concentrated in Asia (4.4 billion) and Africa (1.1 billion), consumes roughly 173 million tonnes of sugar, that is 24 kg per capita on average, with the lowest level seen in the most populous continent (Africa and Asia with average at respectively 16,8 and 17,3 kg per capita) and the highest in America and Europe (average at respectively 43,8 kg and 36,7kg per capita).

The 10 largest sugar consuming nations represent roughly two-thirds of total world consumption. World sugar consumption is set to grow in line with falling domestic sugar prices as well as improved economic performance in 2015. This positive economic prospect is supportive to sugar demand, as manufacturing and food preparation sectors, which account for the bulk of aggregate sugar consumption, are greatly influenced by the economic environment. Sugar consumption growth will be particularly pronounced in Asia and Africa.